Since my twenties I have practised several different kinds of yoga in search of inner peace. When meeting Tulku Lama Lobsang in 2007, it was as if all this had been a preparation to receive his teachings. The exercises had a depth I had not previously experienced. Back home, I was extremely motivated to continue practising and slowly this became a new way of living. Through the practice of Lu Jong, Tsa Lung and Tog Chöd I have regained my physical and mental strength from chronic back pains and after several pregnancies.

Being encouraged to become a Lu Jong teacher, I followed the training with Tulku Lobsang in Switzerland in 2009 and I have been teaching ever since. In 2011, I became an educator. In 2014 I also became a certified Lu Jong 2 teacher.

I feel a deep connection with these precious Tibetan Buddhist teachings and Tulku-la, and am honored to help Lu Jong find its way into the world.

Being Dutch and living in Spain, speaking English, Dutch, Spanish, French and German, my aim is to teach international courses in our beachfront village in Andalucia, and offer a unique experience whilst transmitting the practice of Lu Jong. 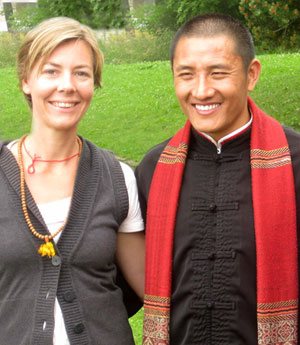 Scroll to top
We use cookies to ensure that we give you the best experience on our website. If you continue to use this site we will assume that you are happy with it.Of courseNo